A few months ago, my husband asked me “Hey have you heard about Critical Role?”. When I admitted I had not, he told me that he had found out through a gaming vlogger and writer, Matthew Colville about this group of voice actors who were on Geek and Sundry live streaming their D&D game.

I’ll have to admit, I used to love 3rd Ed and really had some great memories of 3.5. But a strong dislike for the seeming combat simulator rules of 4th edition really soured me to the future prospects of playing in any Dungeons and Dragons games. I turned my focus to my LARP loves and let my d20 gather dust, forgotten on a shelf with my binders of well-loved character sheets, and my beloved minis. 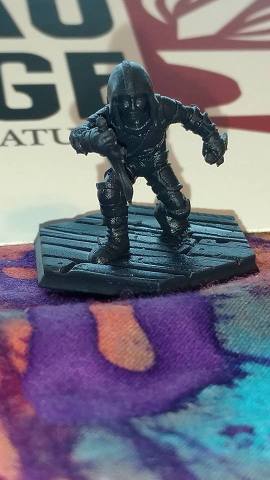 I had heard people say good things about Pathfinder games they were in, sparking only the mildest of curiosity. But nothing had turned me back onto the fun and nostalgia of D&D. My husband and I have run various LARPS and tabletops for a combined twenty years or so and we really loved telling a compelling story with the goal of having people really have a great time and wowed by our deliciously evil machinations. But we were always looking for new tips for keeping the ideas fresh and interesting. So when Matthew Colville started vlogging about his D&D game, we were both hooked by his passion and creativity with his own players. A small ember flickered a bit for the dice and paper love we once had.

By the time I watched my first episode of Critical Role, I was passingly interested to see what these actors had to say about something so nerdy, I thought it had to just be a novelty for the Geek and Sundry site. Now, being an actor of almost no note myself, I always found myself drawn to the more dramatic aspects of role playing games. I assumed that this would be a couple hours of thespians acting, followed by a few inexpert dice rolls. I expected to laugh when they overacted their roles as fantasy creatures and watch with mild interest as they learned the game before a live Twitch audience.

I was immediately drawn into trying to catch up with their stories and get to know both the gamers and their characters. Many of the actors, I would later find, had voiced some of my favorite animes and cartoons. These were not only gamers, but they were skilled and trained to give voice to characters on a page. They got psyched over good rolls, geeked out over art sent in about their characters, and you could feel their anxiety when there were close calls or dramatic scenes.. And they were just damned entertaining to boot!

I initially started binge-watching just so I could keep up with the story. But then that little ember grew for me too. I started to think about what made their game so entertaining for me. What made past successful games work and what made crummy games fall apart. Watching Vox Machina traverse their world and the cast led by DM/actor Matthew Mercer, I started to realize what made D&D special to me.

The players know that the spotlight moves, so to speak. They know that some games and storylines will focus on them and some will not. They allow those to shine when it is their turn and are respectful of one another’s story. They are part of a shared storytelling experience and they really dig into what makes D&D great. Understanding the essence of an adventuring group dynamic and not being afraid to make mistakes together. To have flawed, multifaceted characters that face and ultimately overcome hurdles together is part of what makes D&D so great. Oh and kicking ass! That’s important and spectacular too!

You can see the suspense in the faces of the players and the intensity of the roles that Matthew Mercer portrays. When something is very tenuous, you feel it with Vox Machina. Their joy is loud (sometimes waking my sleeping kiddos) and exuberant, their pain and grief met with visibly shocked faces or tears. I gasp when they lose death saving throws and I jump and cheer when I hear the now-famous “How do you want to do this?” which signals the killing blow landed on the most dreadful foes. What I see when I watch is a group of gamers deeply invested in their characters and you become invested in their victory as well. I cannot help rooting for themand feeling crushed when they fall on hard times.

I went from watching, to getting the D&D itch to wanting to try and find a way to play again. So when a friend said she wanted to try it out for the first time with her son, the hubs and I were not only on board, we were excited! We of course bought 5th edition, a bit leery after our run in with 4th. But we found that the game seemed much more streamlined and easy to jump into. We did character gen in less than an hour and were ready to go right away.

This was two months ago and now we’re running two 5th ed games. We’re still not quite caught up on Critical Role Episodes, but we are  getting there. And we’re so jazzed about  them we’ve started making our own 3D maps and dungeon tiles after being super impressed by the DIY videos posted by DM Scotty over at DM Craft.

I have a new found energy and excitement for D&D and an eagerness to get back into a shared world.

So I thank the folks of Critical Role for putting on a compelling and entertaining game that got me back into a game I had forgotten I loved. I’m officially a Critter!

Hello all, I'm Traci, crafty pagan gamer mom. I'm trying to transition from my old blog to this one, and start fresh with some new content, updates about the games, people and creations I'm excited about. View all posts by MythicalMagpie